Nowadays I eat as much meat as I can. I only eat grass-fed or free-range meat, eggs, only use butter, olive oil, and coconut oil to cook with (i.e. absolutely no seed oils, ever), make my own bone broth (beef and chicken versions), eat a few vegetables (especially cruciferous ones), some fish, a few nuts, dark chocolate, some goat’s / sheep’s cheese, homemade goat’s L. Reuteri yoghurt and goat’s ice-cream, and a fuck ton of blueberries. I still have my morning smoothie on weekdays with the sea moss, flax, and chia (etc.), but really my diet is: meat, meat, and more meat and some blueberries (I may need an intervention in respect of the blueberries). I do not consume any junk food or food with additives or complicated words at all. In addition, the cleaner my diet has become, the more I discovered that some plant foods (i.e. legumes) feel poisonous to my system. I no longer eat them at all.

For example, my lunch today was a bowl of chicken bone broth with some cabbage in it, and a massive side of pork crackling. My breakfast was bacon and eggs. Dinner will be ChalkStream trout (best fish ever, beats salmon hands down imo) with purple sprouting, and blueberries for days for pudding. I’ll probably have at least one (homemade) dark chocolate almond butter cup. But that’s it. My body is a meat-filled temple of joy.

Moreover, the greater the emphasis on meat I have placed, the more I realise that the meat which makes me feel the best is red meat. This is especially so in respect of my IBS which was 85% cleaned up by removing cereals, grains, and starches but the day after eating red meat, is 100% gone. I just feel better after eating cows. Sorry, cows.

I started this meat-heavy diet experiment after getting vaguely alarming insulin resistance test results back in late December/early January. It has been an interesting experiment to say the least, and if you had told teenage or twenty-something me that I would be eating like this, I would have laughed in your face. I was committed to vegetarianism because of my ethics: I did not believe that a human needed to eat meat to be healthy. I no longer believe that to be true. Centring my diet around plants led to IBS, arthritis, and joint pain. Centring my diet around meat has removed that and a bunch of excess weight I didn’t even realise I had (also boobs, bye boobs). In addition, I feel vibrant, strong, and emotionally and psychologically well eating this way.

From a money perspective, I do not think I am spending more than I used to because I eat less. My meat subscription has doubled from £50-£60pcm to £100-110pcm, but my other grocery shops have seriously decreased. That said, I do not track my food spending too much, as I have always prioritised health and nutrition over other things. I don’t need fancy clothes or cars or whatever, but I do need good food and books.

I still think that, from an ethical perspective, vegetarianism wins out. But that’s where it ends. That is also why I only eat free-range meats from traditional and sustainable small scale farmers because it’s the least worst way of raising animals for consumption. I no longer believe vegetarian, and especially vegan, diets to be compatible with true human health. My own personal experience tells me that. And honestly, the dusty grey RDJ I wept over this morning tells me I am not alone.

I don’t want to wade in too much on the environmental element to farming, as I have not researched it other than to say that industrial farming is both a moral and ecological wrong. This goes for monocrop plant agriculture as much as it does for factories full of antibiotic-laced animal prisoners. For instance, a lot of people do not understand that traditional farming methods using pasture raised animals actually helps to lock in carbon and therefore can be seen as a positive impact on climate change. Point is, meat isn’t an environmental disaster; modern industrial farming methods are, whether they’re farming plants or animals.

There is an enormous push now to get people to eat more “vegan food”, by which they mean “food” produced in a factory-laboratory out of some really weird stuff that is not actually real food. Do not comply. If you insist on vegetarianism/veganism, cook from scratch and do not eat this highly processed stuff. It is being pushed on you by greedy multinational corporations who are making fake claims to make money off you. I’m serious: do not comply. I’ve seen the ingredients lists of these products and I do not see how they will do anything other than advance death and disease. 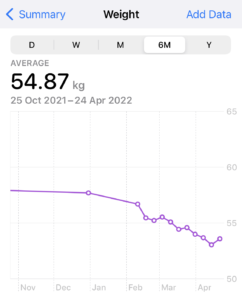 On a final note, many people go on these kinds of diet for weight loss reasons, that was not my intention. However, after I realised I was unintentionally dropping weight after switching to this diet, I started tracking my weight weekly.

As the graph shows, I steadily lost weight at the same time as growing muscle (eh??? but true) until this week when I have gone up from 53.1kg (so wee!) to 53.6kg (yay!). I would emphasise that whilst I was slightly alarmed to drop the weight, I also felt/feel amazing and now have the most incredibly defined muscles, especially in my upper body (hello abs! hello back!). Obviously the muscle definition is also the result of strength training 3-4 times per week, but if you are trying to loose weight, then you would be doing yourself a favour if you tried eating like me.

PS: Yesterday I deadlifted 68kg, which makes me pretty fucking strong for a 53kg 47 year old bird. 😎 Yay me!

PPS: If this post made you go all cholesterol crazy, then read this, this or this.

Stay off my operating table