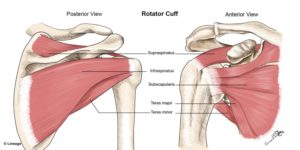 The general diagnosis I received was that there was definitely something wrong with my shoulder but no one was exactly sure why it was causing me so much pain and restricted movement. You could manually move my shoulder through the full range of motion, I just couldn’t get it to do it by itself. In fact, I would have weird sensations of darkness or blackness in my mind when I tried to force my attention to that area of my body, especially when doing pushups. I could follow the command from my brain to the shoulder but it would disappear when it hit the area and then reappear somewhere around about my lats. That might sound odd, but if you are in your body, you will know what I mean.

The ultrasounds showed a small tear in my supraspinatus tendon, but not so big that the orthopaedic surgeon thought it to be a diagnosis. He gave me a steroid shot, after which I ran the fastest 10K of my life but which did fuck all for my shoulder, and wanted to operate but first said I should see a neurosurgeon. The neurosurgeon got an MRI done which showed arthritis in my cervical spine and the suggested that axillary nerve compression was to blame for the weakness: did I want an operation on my spine to replace some vertebrae? NO THANKS TWO TIMES BRUVS.

Most of the physios I have seen have prescribed exercises to strengthen the rotator cuff, especially external rotation and rows. I have diligently been doing those exercises for years now, to absolutely no effect. The shoulder remained excessively weak and painful and I couldn’t do a pushup without the shoulder rolling inwards and forwards.

Then one day a few months ago, and I am embarrassed it took me this long to think of this myself, I was thinking about what movement mimicked a pushup but wasn’t a pushup. (I needed a movement which isolated each shoulder, so half-pushups were no good.) The dumbbell benchpress, silly!

I have been diligently strength training three times a week for many, many years. Even so, I realised that, for no conscious reason, I never really did bench presses. (Maybe it’s because I am a guuuurl?) Anyway, the first thing I did was get a light weight (4kg dumbbells), lay myself down on a bench, and press. What a revelation! What an unexpectedly spindly, spaghetti arm wobble! How wavy can one arm be? Very, apparently. More: when I held the weight at the top of the press, I suddenly felt my rotator cuff muscles splutter and spurt into life. They twitched and shuddered and did all kinds of crazy things as I held that puny 4kg weight up high, and in doing so, I knew I had made the first step towards actually healing the damage.

So for about the last 3 months, I have been doing dumbbell bench presses two to three times a week (as well as other exercises, obviously). At first, I was doing 3 sets of 10 reps and working up to a 1 min static hold at the top of the press on the final rep of each set. That static hold was key for me: it enabled me to push my shoulder down into the bench (it rises/continues too far forwards when pressing which is part of the problem). I could feel this strange sense of security in my brain that told the front of my shoulder it could relax and not do the work, because it didn’t need to worry about the rear of my shoulder falling backwards. That might sound really weird, but our bodies speak quite clearly to us if we know how to listen.

After a couple of months of that, I ceased with the static hold part as I could feel that the wee rotator cuff muscles were no longer twitching and shuddering during the hold. Now I am on 3 sets of 8 with 10kg dumbbells (I am only 53.5kg atm). I am also doing half-pushups again and have made a small amount of progress on my way to two proper pull ups. I also spend a lot of time putting a massage ball under different parts of my rotator cuff (especially the teres and the supraspinatus muscles) and then doing external and internal rotations whilst trying not to puke from the pain.

Eventually, the pain dissipates and I am left with a freedom and alertness in that shoulder like I have not had since the accident. It feels light, clean, and free flowing. Importantly, I can find my shoulder with my mind again, as if my brain has reconnected it back into my kinetic chain. I have genuine hope now that this year, the 47th year of my birth, I will achieve 5 proper pull ups. Wish me luck. I have a long way to go, but I know I have finally found the right path.

What I hope in writing this blog is that someone out there with similar issues may find some help with this article. The main point being: don’t give up. Bodies are remarkably resilient and if we feed them nourishing foods, we can heal, recuperate, and grow in strength even when we’re grey haired and old. Because whilst age is much more than just a number, it doesn’t have to mean the end of the health and fitness road. And neither does an old, and seemingly intractable, injury.

Orhan Pamuk, My Name is Red