This is what my garden looked like when I moved in a couple of years ago. It had recently been cleared of brambles, and had been the foxes home as no one had used it for years.

One of the first things I did was buy a potting shed as I just really, really wanted a shed of my own. My original plan was to have a small patio in front of the shed and some kind of ‘cottage garden’ with native pollinator and bird friendly plants at the other end. I even went so far as to find a load of terracotta paving slabs for free and stacked them up in a corner ready for getting around to laying a patio. Yeah, that never happened. As I have said before, I just couldn’t quite muster the enthusiasm to do much of anything with the space for the first year and a half that I lived here.

Now that I have gone absolutely batshit for microbes, I have been extremely busy doing gardening related things. I have spent an inordinate amount of time on YouTube in the evenings watching people like Huw Richards (I also bought two of his books), Spicy Moustache, Weedy Garden, and Bare Mtn Farm. In particular, I have become fascinated by Korean natural farming methods and have two vats of fermented plant juice (FPJ) brewing right now: one from nettles, and one from green alkanet and other weeds. I already do bokashi which I believe is originally a Korean method, although popularised/systematised by the Japanese. I am also currently making lactic acid bacteria (LAB), and tomorrow I will go and leave a load of rice in a forest to try to collect some indigenous microrganisms (IMO) 🤩. I will do a separate post about those two endeavours because EXCITING!

The more I learned about soil ecology, the more I realised that I wanted a more functional garden which means one I can eat, as well as one designed for the birds and pollinators. Of course, growing any plant means that the soil microbes are fed with sugars via the plants roots; and the amazing fact of the rhizosphere means that, in exchange for the plant exudates, the soil microbes pass the plants the nutrients they need, so this truly is a 360 degree win.

The first time I tried growing vegetables, I was living in rural France. I had reasonable success mainly due to beginner’s luck and the fact that things just grow in France. The climate is right for just about anything I wanted to grow. I practiced companion planting and lunar gardening, but I was entirely focussed on the plants and did not read up about soil ecology at all. So when I moved back to London and tried to grow here I failed, as I paid absolutely zero attention to the health of the soil I was growing in. Soil health is important anywhere, but when you don’t have climate on your side, I think it’s probably even more so. 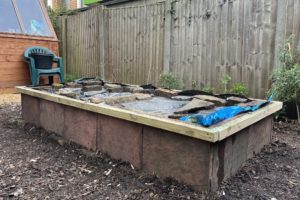 Anyway, deciding to grow vegetables means that I needed a raised bed. I stared at my forlorn and neglected pile of pavers and thought: can you have a new life as a raised bed rather than a patio? I am proud to say that yes, yes they can. It was incredibly hard work, but I am pretty proud of my slightly wonky results.

To construct it, I dug a trench about 5cm deep and inserted the pavers. Along the base of joins on the outside of the pavers, I also inserted bricks to help against bowing. I did all that part myself, although I got the advice of a tradesman I know. He also cut me four pieces of (treated) timber which myself and a neighbour then screwed together and fixed to to the top of the bed with concrete adhesive like a collar. Et voila! A nearly free raised bed for my veggies which should last a very long time.

I first put a load of mycelium-laced wood chips and leaf mould I pilfered from my local park in the bottom, then added top soil and manure/compost in a roughly 50/50 mix. I also added some perlite for drainage and chicken manure pellets for nitrogen and other goodies. I topped it off with another layer of mycelium-laced wood chips and leaf mould and a few worm castings that I found in my garden. As I could not get my hands on real manure (I bought mine from Wickes), I need to add a bunch of bacteria to the mainly sterile filling. So I have also been watering with bokashi juice and will also water with the LAB, FPJ and IMO once they are ready.

It’s covered to protect the soil and also to stop the bastard foxes digging it up. The first night I left it uncovered and they dug loads of holes in it and also shat in it twice. AAAARRGH. The next night I covered it, but did not weigh it down well enough, so they managed to uncover some of it and shit on the soil again. GRRRR. The third night I put more bricks/broken pavers on it and I WON FOXIES but they still shat on the plastic. *shakes fist*

Anyway, gardening. Cool 😎. Obviously one raised bed of vegetables (and a couple of containers) will not be enough to feed me, but I do hope it might help with the cost of living crisis some, as today I paid £5 for 3 sweet potatoes FFS. It will also fill me with pure, unadulterated, grubby, bacteria and fungi laden joy for many years to come. Things I will try to grow are: kale, purple sprouting, golden beetroot, radishes, lettuce, broad beans, Jerusalem artichokes, and sweet potatoes. I saw a cool tutorial for a DIY ‘greenhouse’, so I am going to make one of those for one end of the raised bed so I can also grow peppers and tomatoes.

I read the other day that we are picking a fight with China as well as the one we already have going on with Russia. Yippies. India and Turkey are tight with Russia and China, and given that those four countries make most of everything, we’re probably heading towards Five European Eyes extinction. At least I’ll be able to go out munching on some organic kale chips and roasted golden beetroot and possibly last 5 mins longer than the rest of you supermarket chumps. 🥴