On Pigeon TV from the Lidl 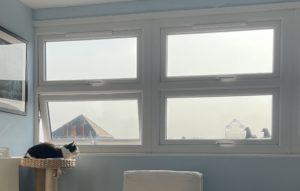 One of the most beautiful things about nature, is that it forces you to reevaluate what you think you know.

Similarly, the Lidl was recently selling what I believed to be a small bird feeder which sticks on your window. As I have a flock of goldfinches living in the trees by my flat, I naively thought I could use this “small bird feeder” to attract these beautiful little birds closer to my window. So I bought the contraption from Lidl, researched what goldfinches like to eat (niger seeds, but also black sunflower seeds and oats) and dutifully started filling the “feeder” every morning.

For many mornings, nothing happened. However, as I live in between two large parks, I am lucky enough to have an abundance of bird life. I have starlings (which annoyingly nest in my wall), swifts, the goldfinches, and then the more ubiquitous magpies, crows, gulls, and whatnot. I knew patience was all that was required: one of them would come!

Turns out that, much as with my so-called rug, this so-called small bird feeder was actually the hardware for a Pigeon TV installation for my cats. Who knew?!

Every morning, a pair of pigeons come and peck at the empty feeder until I get up and refill it for them. I’ll be honest, when you get up close with a (healthy) pigeon, they’re actually kind of pretty. They have really nice pink and green shimmery feathers around their neck which clash with their beady little orange-red eyes. They’re also kinda gangsta. Because they are too big to actually get at the food in the feeder comfortably, they kind of half garrotte themselves to get at the food. It cannot be comfortable. They do not care. I respect that.

I will say, at £2.99, Pigeon TV is remarkably good value. Whilst there are ongoing subscription costs (bird food), the joy I get from watching my cats chirrup and fail in their attempts to climb through the window to get at the pigeons is priceless. Very good value for money, highly recommended. Thank you, Lidl.